A lot of effort goes into lighting your shots. Controlling the pattern of light is always important, but corralling color temperature and light source also fall high on that list of priorities. Mixing continuous light and strobe is easy enough, but not always desired. A flashes ability to choke out ambient light is one of the strengths of strobe photography – especially when the objective is to freeze motion.  There are creative techniques, however, that meld both strobe and continuous light to achieve a mix of motion and stillness.

This application of showing motion can be used for all types of photos. Most often you’ll see this technique in sports photography – it’s always nice to show an athlete in motion, applying their craft. But there are many, non-sports related, uses for mixing flash and continuous light sources. You can use it to imply movement, giving your photo an almost ghostly quality. As the subject moves through your frame, they’ll leave an ethereal trail behind them, this trail is caused by the continuous lighting. At the end of their move they should be frozen in place by the strobe, giving them sharp definition.

The technique uses at least 2 lights (one continuous and one strobe as we’ve mentioned) but you can employ as many lights of each type as needed. Apart from the lighting, there’s some working you need to do behind the camera as well. The first change is fairly obvious – Your shutter speed has to be long enough to allow for capturing motion. Speeds of 1/250 or more are usually required to stop motion, so naturally turning the dial the other way will increase your chances of capturing the movement of your subject. You’ll need to play around with your shutter speed to see what works best for your scenario, but generally speaking a speed of 1/30 is a great place to start, and then dial up or down as needed.

The second piece of work you need to do happens behind the camera. You must switch your camera’s flash sync from 1st, to 2nd curtain (also known as rear curtain). What this does is fire your flash at the end of the exposure, where-as normal flash operation will trigger the flash at the start of an exposure. The reason for this change is aesthetic. 1st curtain flash will make your subject sharp at the start of your exposure, and any motion that happens after the flash will then be captured by the rest of the exposure. The end result is a sharp subject with motion blur moving forwards from the subject. Now, if you’re a fan of cartoons (which I am!) then you’ll know that motion blur should always move away from the subject, leaving a trail of where they have been. 2nd curtain flash does exactly this. With 2nd curtain enabled, the first part of your exposure captures the motion and then, right before the shutter closes, the flash fires, capturing the subject sharply in their end position, leaving a trail of where they’ve been behind them.

Both Canon and Nikon support 2nd curtain flash. To enable this you have to attach a canon (or Nikon if that’s your system) brand flash to your camera. From there you can either set 2nd curtain from your camera menu, or the flash menu – check your manuals because each model of flash and camera does it slightly differently.

There! Now you have 2nd curtain enabled on your on-camera flash! Oh, but wait, there’s a problem. Shooting flash from the camera is OK in a pinch, but for flattering light we know we have to get the flash off the camera. Okay, there we go, now that flash is on a stand and in a better position. But wait, now how to we get 2nd curtain to work? As soon as you take your flash off the camera it stops accepting 2nd curtain as a flash option. How do we work around this?

Well, there are several methods. If you’re using only two lights, one continuous, one strobe, then you can use a sync cable to stretch from your camera to the flash. This will restore communication between your camera and the flash and allow the flash to operate in 2nd curtain. Now, if you’re using several TTL enabled flashes wirelessly you might expect that you could set 2nd curtain operation on your master flash and then use that to communicate to your slave flashes. Sadly, this is not a reality. Canon has stated that 2nd curtain via master/slave communication is not possible, and therefore you can not use this method with an array of wireless speedlites. Bummer!

So, what if you need more than one light, or maybe you need a power output beefier than what your speedlite can produce. Well, I found a work around! Most studio strobes have an optical sensor that will fire the flash the moment it senses a flash from another strobe. So, what I’ve done is take my canon speedlite, using it as an on-camera flash I’ve set it to fire as 2nd curtain and then I bottom out it’s power to 1/128th power. At this power it’s not contributing light to my scene at all. Instead, all it’s doing is triggering my studio strobe at the end of the exposure.

There are other, more expensive options at your disposal too. Pocketwizards, and other transmitters, have their own options for allowing 2nd curtain functionality wirelessly. But, for the most part, the optical slave option works in most situations without any drawbacks.

Below is an example of 2nd curtain flash. For this example I am using a sync cable from camera to flash since I am only using two lights and I’m standing only feet from the subject. My direction to the subject was for her to turn her head as I pressed the shutter button with the anticipation that she’ll finish turning her head by the time the shutters closes and the flash fires. It will require a few takes to get the motion and timing right, but once you reach a working rhythm the photos will start coming in Fast and Furious™.

2nd/Rear Curtain will give your photos dreamy, ghostly motion.

Another example of motion blur using the same technique. Here I asked the subject to look at the continuous light source for a 1 second before turning 180º and changing his pose. The flash fires at the end of the exposure to capture him in detail as he begins to play the sax while leaving a motion trail from his original position. 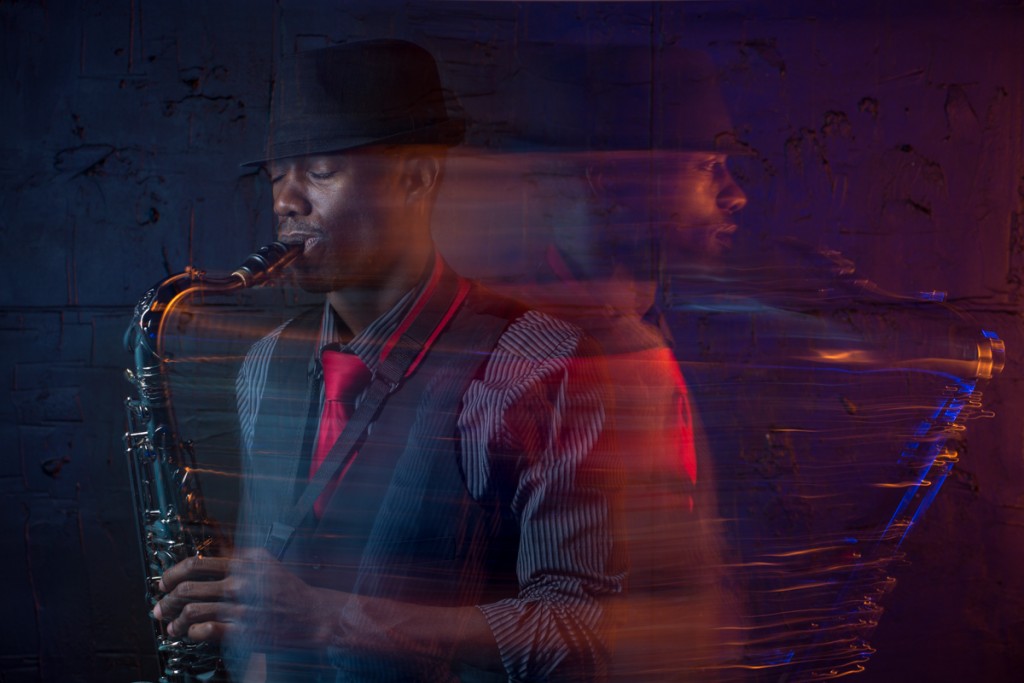 Benjamin Lehman is a Commercial Advertising, Portrait, and Wedding Photographer in the NorthEast, Canton, Ohio area.