Sometimes you just hope the stars align. It can be the talent; are they willing to go along with this crazy idea of mine? Sometimes it’s making the client understand the intricacies of the shot. Sometimes it’s something that’s completely out of your control like the weather.

Dealing with, and planning for weather as a photographer

Weather is the bane of all photographers. At best you can rely on the weather channel to give you the conditions that may exist in, oh, say 2 hours from now. For fairly small time frames, weather predictions are usually in the ball-park of what the reality will be. But, say the shoot is 5 days away, a week, 10 days or more! Well, then you’re stepping into some really iffy territory. Sure, you can probably be guaranteed that it’s not going to snow in the middle of July, but trying to predict puffy clouds against a clear sky at sunset a week from today? Yeah, not gonna happen – most likely.  If you’re lucky everything will work out, and if you’re not, you are in for total re-think of how you have to approach your photo.

I’m not trying to get a pretty good photo, I am trying to get THE photo, the one that is in my head. During rainy seasons we’ll often set a primary day and then a back up day just in case the weather is not cooperating at all. This is sort of ‘best-case’ planning for avoiding ‘worst-case’ scenarios. Even then, if your back-up date approaches and the weather still isn’t in your corner, you have to be ready to prepared to make the best of what you’ve been given. Thankfully, bad weather doesn’t mean bad photos. As Moose Peterson says, some of the best photos are made in the worst weather. Even then, however, it’s not a good idea to drag your model into a tornado and just hope she keeps her face to the light as she’s being lifted into the air, on her way to meet the Great and Powerful Oz.

There are also times when a certain type of weather is a necessity in your photo. Your rain jacket product shoot might require a backdrop of storm clouds, or that magazine shoot you’re on depends on a sunny beach while you’re taking photos of surfers. In these cases you have 3 options.

You wouldn’t be the first photographer who’s had to resort to any of the above options. Personally, in a pinch, I would opt for the studio option if all else fails. But, in my opinion, there’s no substitute for the real thing.

All of this came into play recently when I had a shoot scheduled, several weeks in advance, that called for snow. I wanted the whole sha-bang. Snow on the ground and snow falling from the sky. Why was falling snow important? Well, it would be nice to capture snow falling throughout the image, but more important, nothing beats the look of freshly fallen snow on the ground. So, with my desire for fresh snow firmly in place, so began the anxiety laced waiting game. You know the game, the one where you’re checking weather.com 5 times a day to see if your dreams will come true?

Luck was on my side. As the day approached the likely hood of snow kept increasing. On the day of the shoot snow was forecast to start falling at 4pm, exactly 1 hour before the scheduled shoot – Perfect! We packed up the gear and headed out. Our location was an area next to the Cuyahoga river, deep inside of the Cuyahoga Valley National Park. Less than 15 minutes from our arrival the snow began to fall, heavily. So heavily in fact we lost control of our car for a moment as it struggled to deal with the inch of fresh snow covering the small, windy road. We made it off of the road and into the parking lot without further issues.

There was a new problem however. Remember all that snow I wished for? Well, there was so much snow falling that it caused a white out. Visibility was no more than just 20 feet or so – not so good for a photo that required a river-scape in the background. Hedging our bets we walked down the trails to our final location and began to set up our gear.

In any situation where you’re dealing with wet conditions (snow is, after all, just water) it’s important to take the safety of your gear into consideration. We took extra shoot-through umbrellas and used them as, well, umbrellas, shielding our flashes from the heavy snow. My cameras, a 5d mark II and mark III, are both weather proofed so as long as I took some simple precautions to keep them from being heavily soaked they would be fine.

By the time we finished our set up, the falling snow had slowed down to a workable level. We got the talent in place and started to snap away. Right away, we knew everything was working beautifully. The snow, the light, the location, the river – all of it was playing together just as I had seen it in my head for all of these weeks. It felt so great to have everything come together at the last moment and, pun alert, just click.

Not all shoots will work out this well. The weather is something you can’t predict with any degree of certainty, at  least not 100%, so you have to plan ahead  – sometimes weeks ahead. Be prepared to be flexible, and make sure  your client understands they may need to be flexible too.  If it’s a large budget shoot with a lot riding on the final frame, it’s worth taking the time to get it done right in the right conditions. 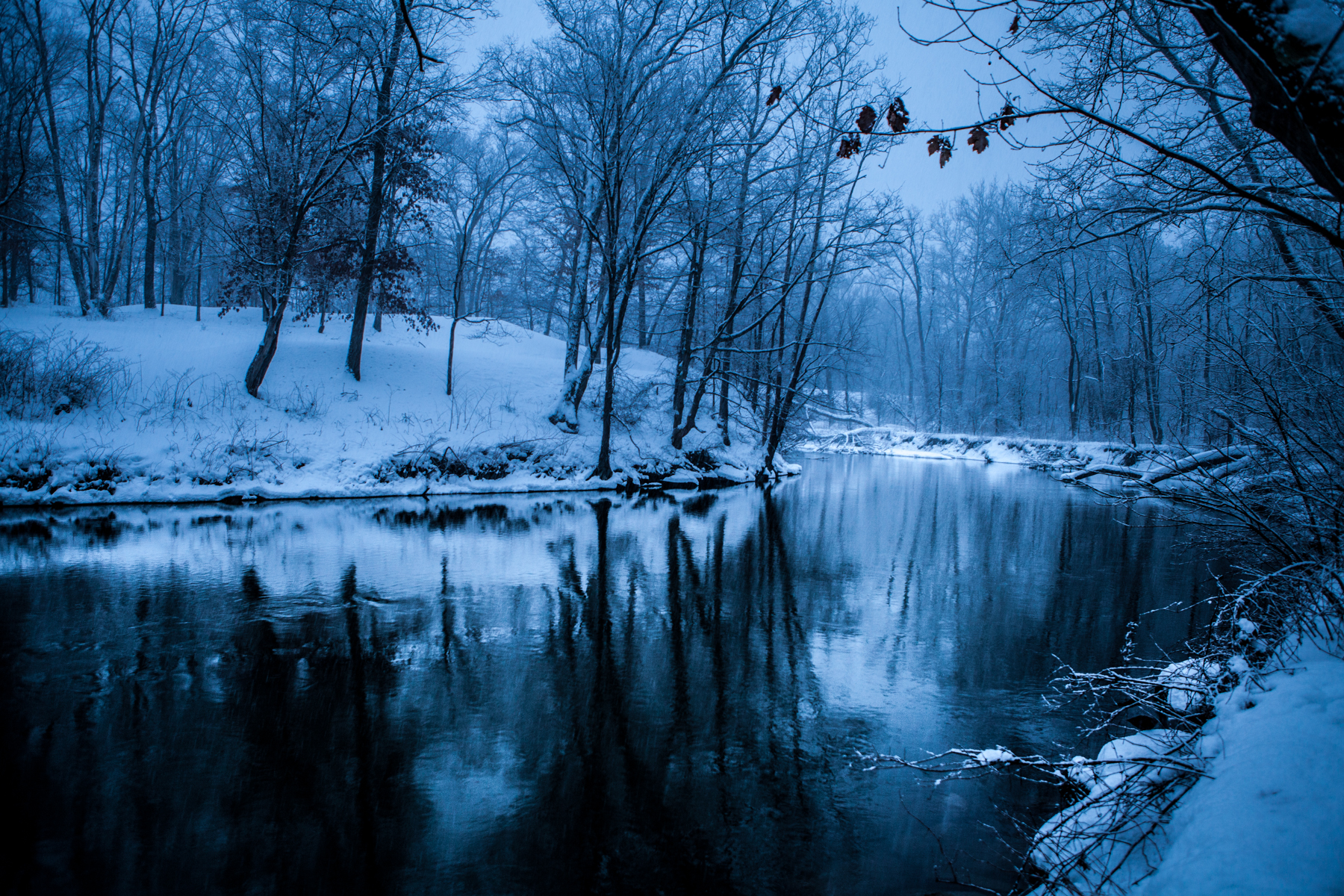 The scene at the Cuyahoga River on a snowy day. Because of the low light conditions, the entire scene took on a blue hue – meaning we wouldn’t have to mess with color balance to give the final image an over all cool feeling.

My wife and assistant, steps in front of the camera as we set up the flashes so we can test the quality of light. Notice how the bluish hue of the background helps her ‘pop’ out of the background. Cool background colors vibrate well with warm skin tones.

Benjamin Lehman is a Commercial Advertising, Portrait and Wedding Photographer in the Canton, Northeast Ohio area.