I‘ve always been a studio strobe kind of guy. My feeling was that studio strobes offered me more flexibility. It gave me more power output when I needed it, it gave me better coverage when I needed and I felt, since they have external battery packs, that I could put them anywhere I would ever need to. It also seems like the best light shaping modifiers were always available for the larger lights. These, among other reasons, always made me feel like if I was going to drop a wad (<-super technical term) of cash on a lighting system that it would be safer spending it on a larger studio strobe. Basically, I thought I had all my bases covered.

But over the past few years I found that when I was setting up my lighting schemes I would often relegate my studio strobes to background tasks, like lighting the environment or using them as large light washes to bring up ambiance a stop or so. Meanwhile, my old, smaller 430ex and 285HV flashes were being used as focused key lights and kickers. Without realizing it I was relying on my smaller flashes for a lot of my precision work. As time progressed I started to use them more in the field and not long after that came an awareness that I had actually been limiting myself by relying so heavily on studio strobes in a lot of situations.

Studio strobes have their use, and that use is big light. When I say big light, I mean any situation where either coverage or sheer energy is needed. When I was working on my project for the Akron Canton Regional Foodbank, where I was often shooting in the noon-day sun, I needed their large power output to reign in the ambient sun so I could put more flattering light on my subjects.

But noon-day photo shoots don’t happen that often. The Foodbank job was very run-and-gun, but usually when you’re contracted to take photos you have a lot more control of your shooting schedule and thus you can take your portraits in more forgiving situations. It’s in these controlled situations where a set of speedlites can easily provide you with the power and flexibility that you need.

Where Can You Use Speedlites? 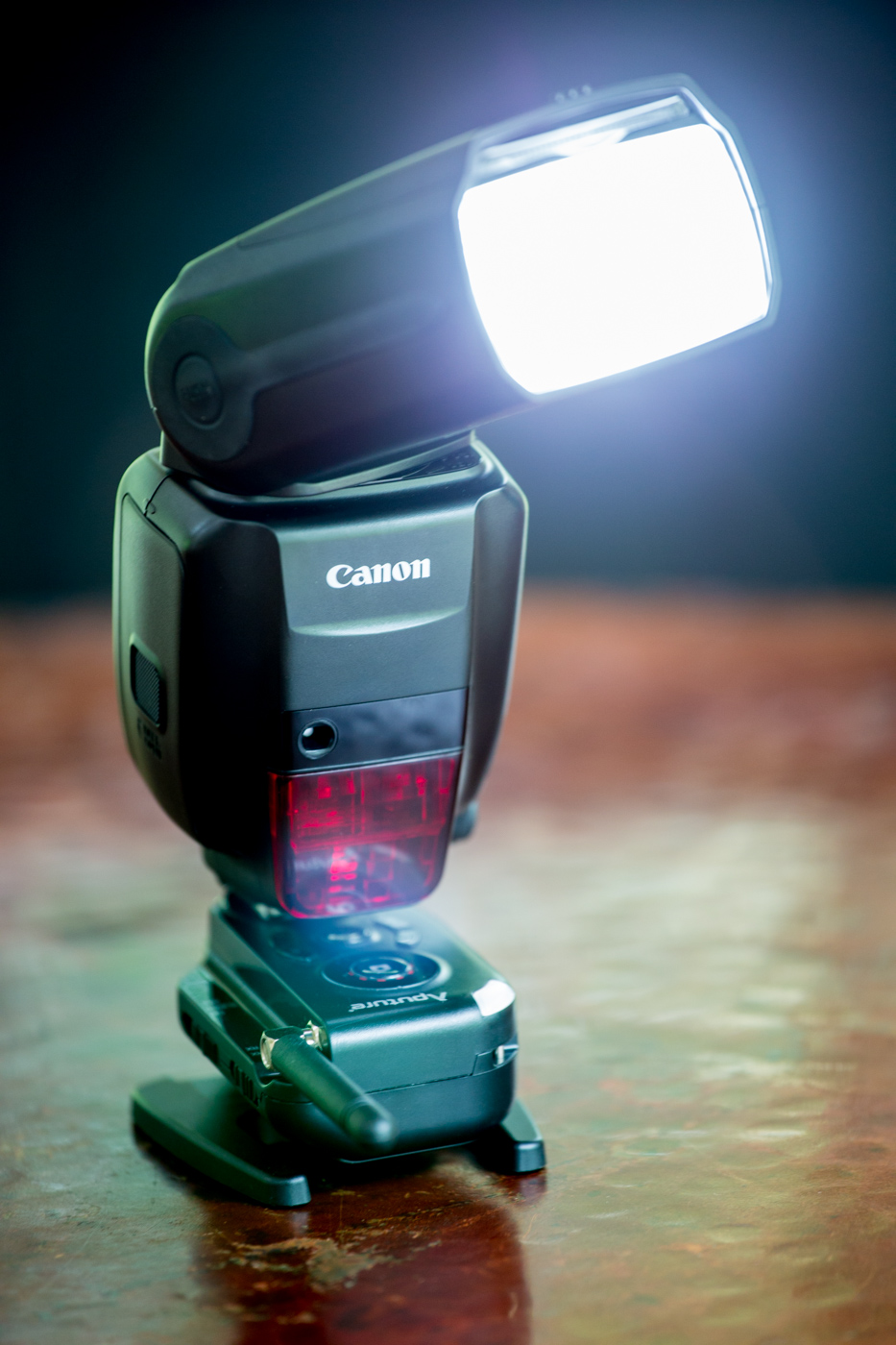 Pretty much anywhere you could use any other type of light except for maybe the scenario I mentioned above (and even then a large bank of speedlites can do the job, as illustrated by Joe McNally). There are unique properties shared by all speedlites that make them a good, defacto go-to choice for photographs. Their full-featured; even a ‘simple’ speedlite like the vivitar 285HV Zoom Thyristor (who comes up with these names!?) has all the basic  control that the more expensive speedlites offer. Another bonus is the size – these things are small. I can fit 3 or 4 of these speedlites into my camera bag and still have room for my two main cameras, gels, extra lenses, wireless triggers, and batteries.

Anyway, if you’ve used speedlites before none of this is news to you, and so this brings me to the point of this post: Canon’s newest speedlite, the 600ex-rt which I recently purchased.

No ceremonial unboxing for this light. I got it in the mail at 12, and by 1 o’clock I had it pressed into service. In case you’re unable to read between the lines here, that’s a testament to just how easy it is to use this speedlite. I was able to put it on my camera and start shooting, full featured right away, without having to read the 40,000 page manual that comes with it. I had an event I was contracted to shoot. It took place in a large outdoor venue and this meant my main issue was controlling the ambient light from the sun. Most of the event took place under a large, unwalled tent. The ceilings of the tent were anywhere between 12 and 40 feet tall. I found I was able to point the 600ex straight up, zoomed to 200mm at full power and fill the entire tent with soft, flattering light. More than that, I was able to slave my older 430ex II to the 600ex and use it as a kicker to give the event photos an aesthetic more usually found in wedding photos. Where event photos are usually flat, and rather mugshot/driver’s license looking, I was able to use the 600ex to take the quality light and thus the quality of the photos up to a much more professional level.

A little about the flash itself. It’s larger than it’s predecessor, nearly half again the size of the 430ex II. But that extra size means it’s more powerful and versatile. The back of the flash has a lot more in common with the 530ex II that it does with the stripped down 430ex II. However, users of either of these older flashes will still be able to pick up the new 600ex and put it to use without any frustration. The controls are laid out logically. The buttons feel responsive when you interact with them. With the old 430ex II, it often felt like you had to press the buttons nearly through the front of the flash in order to to get it to register, not so with the 600ex. Button presses are easy and precise. The dial is also very reactive, although it is a little hard to turn if your fingers are sweaty or wet during humid days.

Switching from ETTL to Manual (the two modes I use exclusively) is as easy as pressing the larger MODE button twice. Other modes included are Multi, for action/sports shots, and EXT.A and EXT.M for in flash metering. 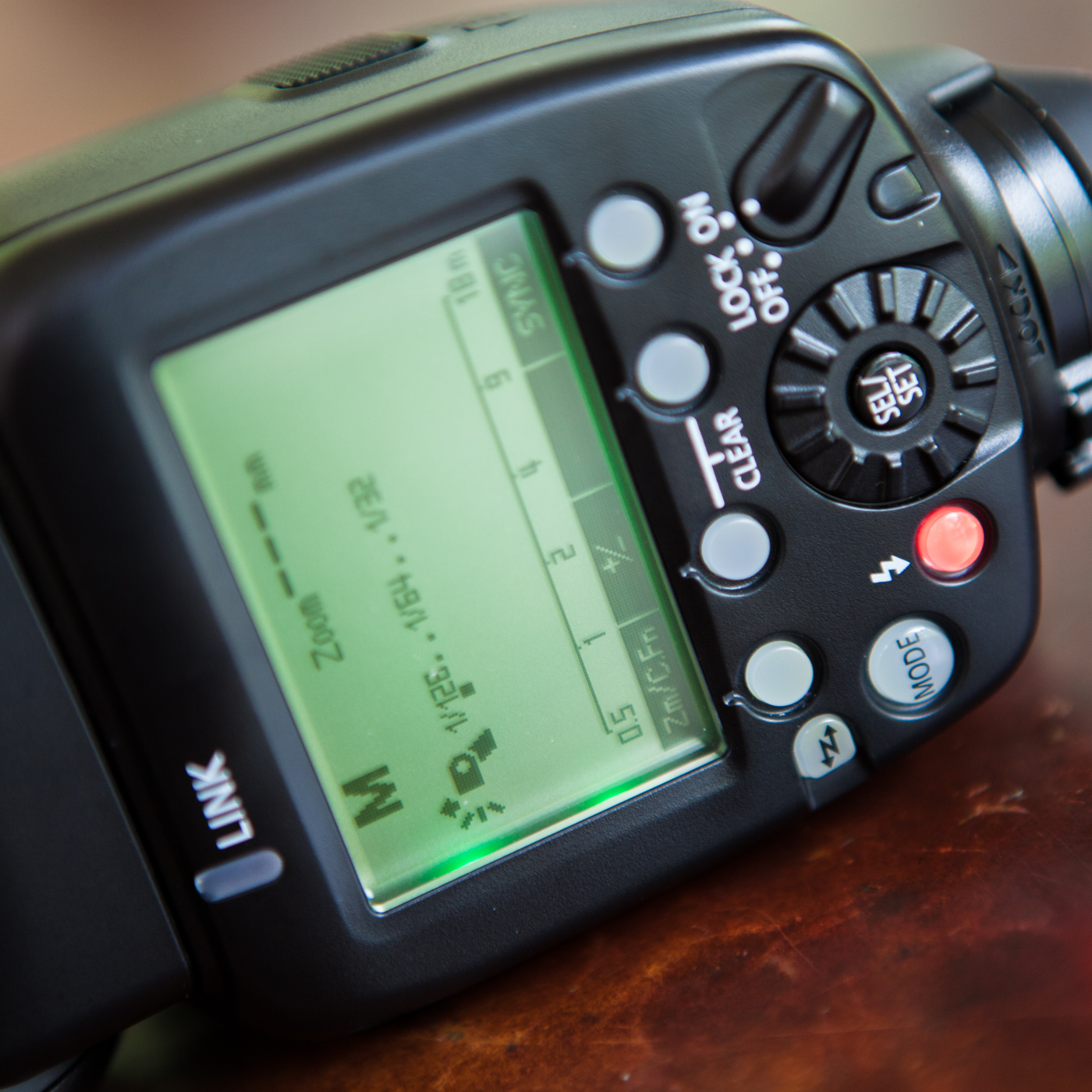 Turning your 600ex into a master for group flash control is just as easy. Simply press the Wireless/Linked Shooting button to cycle through the modes that best fit your situation. The 600ex-rt has a radio transmitter built in (thus the ‘rt’ in 600ex-rt) for use with other 600ex-rts. Because I only have one 600ex-rt at the moment, I used the optical slave mode to control my 430ex II. From the menu you can control all of the functions of your master 600ex as well as the functions for your slaved speedlite, such as exposure compensation. While radio transmission would be the go-to option if you have multiple 600exs, the optical method worked fantastically, blowing away my expectation. When I had the 600ex pointing straight up into the ceiling, it was still able to control the 430ex II which was often all of the way across the room – some 40 to 60 feet away.

The 600ex II also comes with a nice plastic gel holder, although the flash only comes with tungsten balanced gels, no florescent gels – hrmmmm. I also noticed that the flash seems to have two little electric “eyes” under the area where the gels snap on – these are used to transmit color correction information to your camera based on the gel you are currently using. How cool is that?! No more dialing in kelvin numbers to get white balance!

In an effort to keep a long post from getting longer let me just sum this up by saying if you are a studio strobe purist, like I was, take a chance on a speedlite like the 600ex. You’ll find it has its uses in the studio and that it’s indispensable in the field.

Benjamin Lehman is a Commercial Advertising, Portrait and Wedding Photographer in the Canton, Northeast Ohio area.