We took PCB's Einstein out into the field and put it through it's paces.

Our Einstein mounted on a C-Stand, spilling light into a 7′ umbrella.

Einstein’s backfacing LCD Screen with more information than you can throw a stick at.

Let’s face it – flash photography is daunting. It’s so daunting that some people try it once, only to never return. Even if you have a good handle on the principles of flash photography there are still a myriad of issues that can crop up and turn a simple photo into a complicated affair.

Dials, lighting ratios, radio & wireless triggering, power range, compatibility with lighting modifiers are some of the issues that confront a photographer every time he takes his lights into the field.

So, how does the Einstein deal with all of these problems? Let’s start by saying that there is no magic button on the back of the Einstein that will tap into your imagination and render the exact lighting that you desire. But it does have a few great options that allow you to interact with the light so you can easily achieve the light you’re looking for.

I’m going to throw a dart at the board here and just start with a random topic: White balance.

I am not a huge curmudgeon when it comes to a flash’s color balance. I tweak the color in nearly every photo I take in post to suit my taste and therefor it’s never been a big issue for me if one frame has a slightly different temperature than the next.  There are some people, however, who very much rely on their lighting system to produce the same quality and temperature of light consistently between each frame. You know the types, they color balance before each shoot, read every element of their set with a light meter and talk with precise and measured words, often in a German accent. That’s all fine, and if that’s you, good news, the Einstein totally caters to your needs.

On the back of the Einstein lives a small LCD screen, and this screen holds a deluge of information. So much more than the usual per-stop digital-number readout. This screen, which is actually a visual portal to all of the things that make the Einstein so great, allows you access some amazing sub-features. One such feature is the ability to switch between action and color mode. Action mode allows the light to have a dramatic power drop after it’s main light burst. This power drop allows you to capture action at speeds of 1/13,500! There’s a good chance that even your camera can’t capture action at those speeds.

I tried action mode out this week in the studio and it absolutely amazed me. This feature will freeze the action in a perfect stand-still. No motion bleed what-so-ever, only clear, clean, crisp edges no matter what action is happening in front of your lens.

But, if you’re more concerned with color temperature, then switch over to Color mode and all your color balance woes disappear. Normally, as your average studio light repeatedly flashes it’ll slowly change color temperature over the course of a session. Same with changing it’s power. Dial in more or less power and you’re also changing the color range every so slightly. The Einstein has some really smart internal logic that combats this problem with astonishing results. From their website, “In Constant Color mode, the emitted color temperature is held constant at 5600ºK (+/- 50ºK at any power setting or input voltage).”  That’s pretty impressive.

Some of the less glamorous but essential features every photographer relies on are also represented in the Einstein. Things like a modeling light and radio channel selection. While we’re on the subject of radio/wireless functionality, PCB offers a very cool wireless system known as the CyberSync system. The Cyber Commander is the main piece of hardware that attaches to your camera and allows you to control your lights remotely. The back of the Cyber Commander showcases an LCD screen that looks very reminiscent to the one on the back of the Einstein.

One thing missing from the Einstein unit that other flash units, like Elinchrom’s, have built in, is a wireless receiver. Instead, you’ll have to purchase a separate, “transceiver”, for the fairly reasonable price of $29.95. When you consider the cost of the more expensive studio light systems, this small extra price barely factors into the equation.

Now, let’s talk about some of the more the practical applications of this light and how it’s going to make life easier in the long run. I will attempt to describe these features in the context of some real world applications. To help me out in this endeavor I spent some time with the light in the studio and on location so I could relay some first hand accounts. 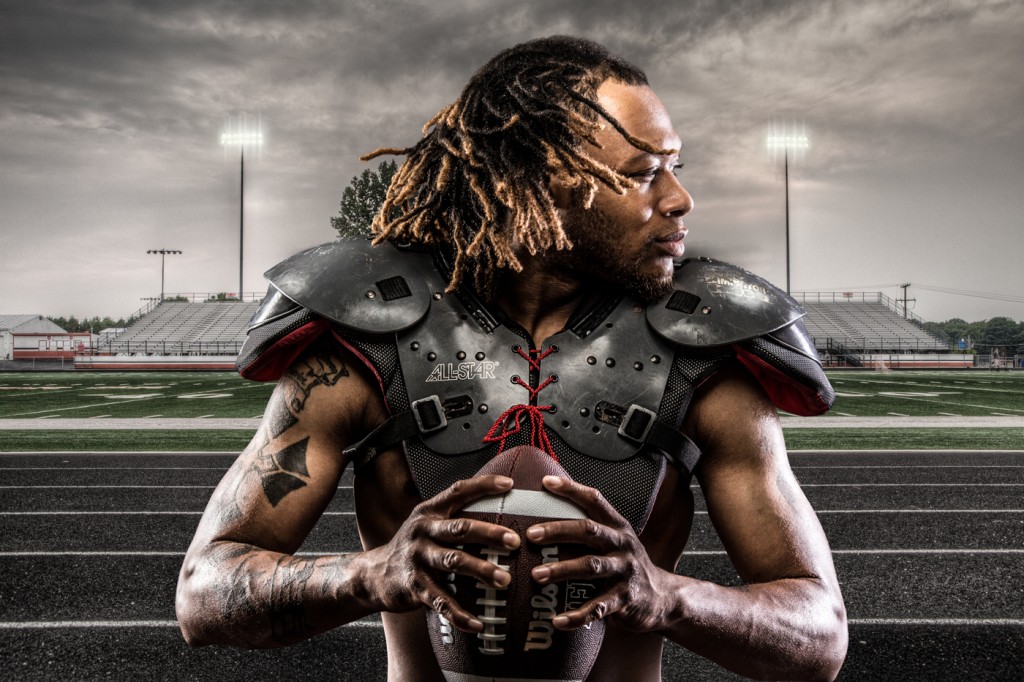 Action Sports Portraiture with the Einstein

The Einstein allows you to dial in your power at 1/10 of a stop increments. This is really handy when you need to fine tune every aspect of your shot. And, with Einstein’s 9 f/stop power range, there’s plenty of room to either over power the sun, or add a touch of fill to a candle lit seen. At it’s lowest power range I was able to use my camera at f/2.8 and get a creamy quality of light while retaining a dreamy level of focus. Add in some more layers of diffusion and you’ll be able to pull your camera into the f/1.4 range.

The first shoot I used this light on was a gritty, high-contrast sports portrait. The light need to be punchy, with a lot of zap. I set the Einstein to exactly -6.0f power. How did I arrive at that number? Well, I played around a little. I don’t use light meters. Personally, I think light meteres are a piece of dinosaur-age equipment left over from the dinosaur age of photography. Your camera, it’s LCD screen and your eyes are the Light Meters of today. So, when I am lighting with the Einstein, I am using it’s fine incremental selector to dial in the light I want.

Doing this is as simple as pushing either the up or down buttons until you’re happy with the result. I also had the Einstein set to action mode to freeze-frame his hair as he swung his head around before each push of the shutter.

Getting Out of the Studio

The photo we just used as an example was a studio photo which we then composited into a matching background. Now we want to explore what happens when you take the Einstein into the world. For that, we headed straight into the wilderness – which just happens to be a small forest near the studio. Hey, it’s what we got, so it’ll just have to work.

We took one Einstein, one 2×3 Softbox and one mobile power source with us. In our case, the power is coming from a PCB Vagabond Mini. I’ve had this Vagabond for years and have used it with my older AlienBees on many occasions and it has always gotten the job done. Not surprisingly, the Vagabond powers the Einstein without issue. 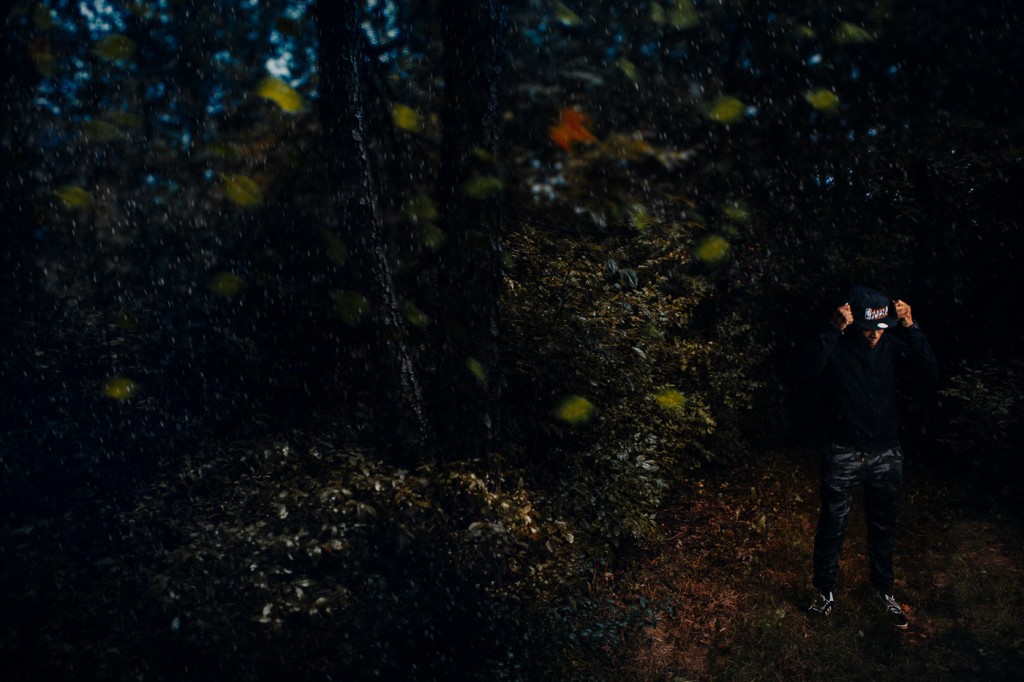 In the Woods with the Einstein 640

Here in our wooded location, it’s already pretty dark, so we need to set the camera to take in some ambient light. The 9/f stop range of the Einstein lets me take the power way down, almost to the very bottom, to give me just enough light to make our subject appear out of the darkness. With the help of a grid on our softbox, you can see that the Einstein was able to paint just enough light on his face and hands to give him an almost ghostly, coming out of the shadows appearance. I am highlighting this because many studio flash systems, including some very expensive solutions, aren’t viable at low power — meaning sometimes their lowest setting isn’t low enough. Sure you can set your aperture to adjust for this, but what if you want to maintain a dark scene while retaining total control over depth of field? The Einstein’s power range lets that happen.

I haven’t come out and just said it outright, but hopefully you’ve been catching the hints — the Einstein 640 is just as good, if not better, than most of it’s more expensive counterparts. ProFoto and Elinchrom systems will always have their place in the studio, but so does the Einstein. It has the performance of the big name strobes and features that can only be found on the Einstein. I’m so confident and in love with this system that I am already preparing to have an all Einstein studio.

Benjamin Lehman is a Commercial Photographer in the Canton, Northeast Ohio Region.