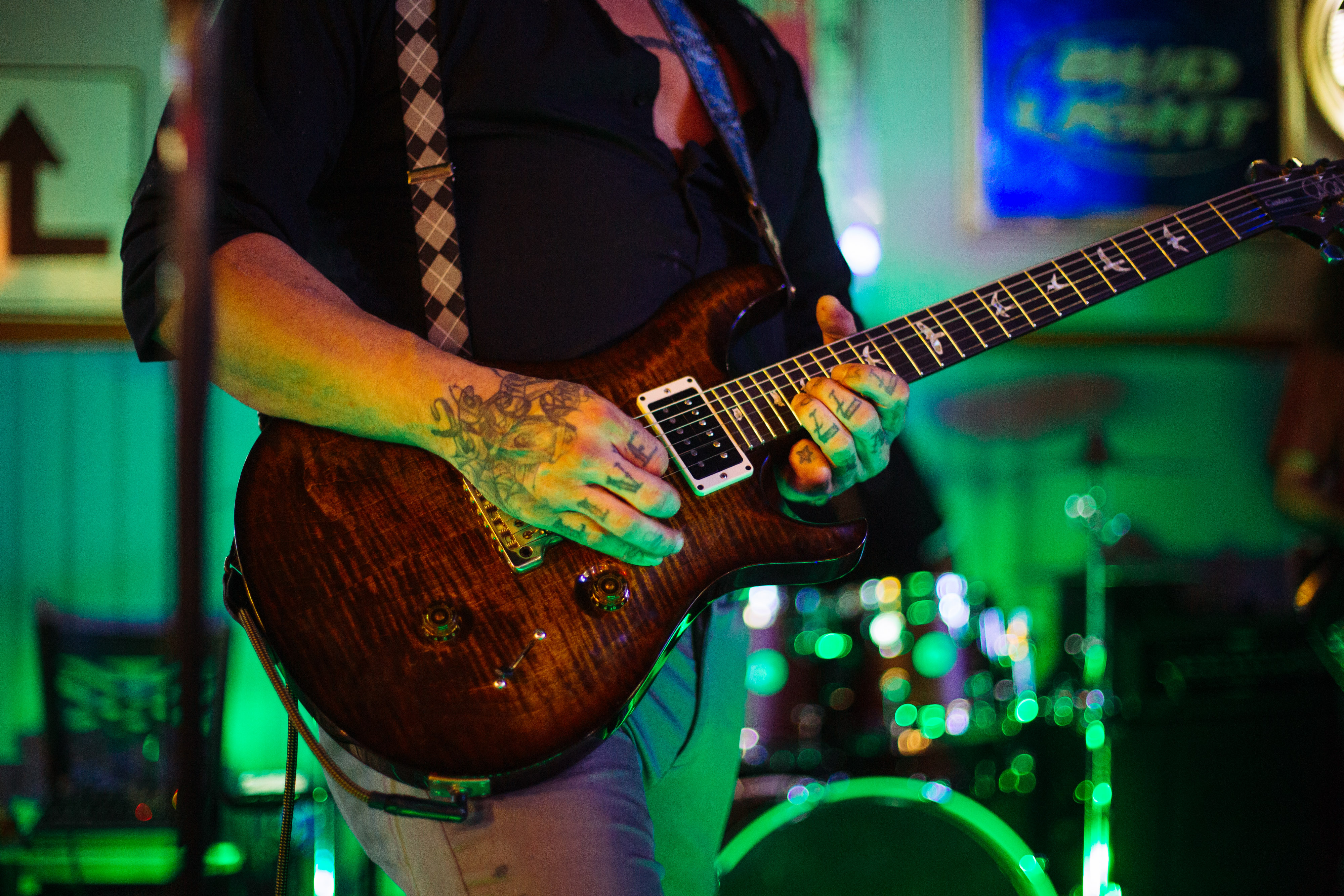 If you are interested in taking portraits, working as an event, or entertainment photographer, then a great way to practice your skills and kick off your career is taking pictures of local band performances.

Sounds too simple? Let’s think about this for a minute. Bars and venues are vastly different from one to the next. They are dark, filled with obstacles, people, and challenging angles.

One great skill for any photographer who may work outside of their studio at some point is knowing how to navigate a busy and crowded playing field. There’s a real skill involved in walking through a crowded room and not bumping into anyone, or more importantly not bumping your camera into anything, all while remaining invisible to the crowd.

It can be a fun challenge finding angles and compositions for your photos when there is a sea of people around you. An added challenge is the fact that venue stages are often very small compared to the rest of the room. As a test try moving around, taking photos from all different vantage points. Get pictures at the foot of the stage, get pictures from the side, try to take a few through the crowd, and see if you can even get on the stage and shoot from behind towards the crowd. Another fun exercise is what I like to call B roll photos. These are all the little close-ups that may not have anything to do with the people but still relates to the music and atmosphere. You might get a close-up of the guitar players foot pedal, or maybe just a drink being held up in the air by a spectator. Maybe it’s a silhouetted photo of people dancing against the stage lights. Try taking photos that are both journalistic and literal as well as photos that are more conceptual.

If you ever wanted to learn how to use the exposure triangle effectively in an extreme environment, there is almost no better place than a bar or concert venue. The rooms themselves will be nearly pitch black and then, on the opposite side of the spectrum, there are the stage lights which are often brighter than the surface of the sun. There have been times where I have almost pulled my hair out because I am simply trying to get some sort of even exposure of the entire band, where the reality is that the people at the front of the stage will be red hot and those in the back will be shrouded in darkness. You have no control over where those stage lights are pointed, and people will tend to wander in and out of them repeatedly. But there are also times where you can use these massive shifts in contrast to your creative advantage. Again silhouettes are a great thing, and you can just use them as subject spotlights if nothing else; Let the whole background disappear while the subject is lit perfectly.

This is also a good chance to play with color. Stage lights will often automatically flicker between all hues of the rainbow. If you’re lucky you can get somebody lit on stage cut between two contrasting or complementary colors. When that happens it’s magic. Feel free to move yourself around so you can use those lights to even more of an advantage by letting one set of lights back-light your subject while another set gives you more of a broad coverage of light on the subject.

Be wary of color balance: if the stage lights are bright red or bright blue there’s not a whole lot you can do in post to wrestle them back into a natural color space. It’s better to just go with the flow and see how you can make the colors be part of the composition. Lastly, working in dark environments like a club will definitely teach you the limitations of your equipment. I’ve never advocated For the concept that, “you need to have an expensive camera to take better pictures”; this however may be one of those few cases where it may nudged you towards making a decision about what sort of lens you might need for working in low light conditions.

I have actually gotten a large return on new jobs by just going out, taking photos of bands, and sharing those photos with the bands on social media. As those photos get seen by more and more people chances are you will start to have people from other bands asking if you would be interested in doing their photos. For me personally it has led to more paid band photography as well as more personal portraiture work like headshots and life style work. More business is always a good thing!

Benjamin Lehman is a Commercial Photographer in the Akron, Canton, Cleveland, and North East Ohio Area.